An Unbreakable Bond Between a Teacher and Student

An Unbreakable Bond Between a Teacher and Student

Kenden met Ms. P two years ago. Her entrance into his life was a total game changer. I have read many stories about special bonds and the positive impacts teachers have with their students and I am so blessed I am able to share my son’s story about him and his teacher’s journey together. 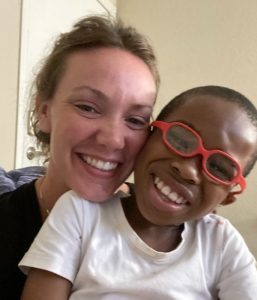 Kenden started school at the age of three. He has always been in a special education program due to his disabilities and needs. A special education learning environment gives him the support and one-on-one time needed to ensure his success in school.

In the beginning of each school year I think about various things. It could be academics, behavior, progression, regression or whatever happened the previous school year. However, his kindergarten year really help build my confidence.

Kindergarten was most definitely a great experience. The majority of his goals were met or right on target and he blew me away that year. He showed me how truly smart and intelligent he is. To be honest, my expectations for Kenden’s learning ability was low. I associated his inability to communicate with learning. I seriously thought his lack of communication meant he could not learn. My own ignorance did not stop my son.

Before entering the first grade, his education team and I set new goals and expectations for him. We were excited and eager to get to the first day of grade one. The school year rolled around and for the first time I had no major concerns. At the end of the school day, I anxiously awaited for him to get home so I could read his first day of school note. I was so happy to read that he had an awesome day! He had no behaviors or acts of aggression, not one thing went wrong. This assured me that first grade would be a replica of Kindergarten.

Well…. After the first day, it was downhill from there. His behaviors were outrageous. He was physically attacking his teachers and classmates, leading to countless suspensions. I spoke with his behavior specialist and we decided to change his medication. However, that did not provide much help.

The school ABA therapist worked with the teacher on strategies and techniques to minimize his behavior’s. His entire education team went to school to work with him but it didn’t make a difference. At this point he knew he was in control. All the adults at school lost control and we had to figure out a way to regain control and get him back on track.

There were two choices recommended for Kenden. The first was for him to complete school through homebound. That meant a teacher would come to our home 2-3 days a week for a couple of hours. The second option was to move him into a therapeutic behavior classroom. His school did not have that classroom setting which meant Kenden would have to move to an entirely new school. My emotions were so high. This was one of the most important decisions I would ever make for Kenden’s education career.

I was upset but I knew homebound wasn’t for Kenden. Though his behavior was out of control, I knew deep down he enjoyed school and the structure it provided him. I decided to move him to the new school and the team agreed with my decision. I cried but I knew my decision was best. The therapeutic classroom structure would provide a more one on one approach. During the time Kenden would be entering into the classroom there were only two other children. The goal of the classroom is to focus on behavior in hopes of him reentering back into his original classroom.

After we established Kenden would be moving to a new school, the team gave a small introduction about the teacher. Ms. P. She was not there physically but they felt confident that she can turn things around for Kenden. They said she had a passion for her students and she really enjoyed working with behavioral children. This was a new route in Kenden’s journey. I knew this would require more work, more dedication, and my willingness to be open and honest while working with Ms. P. This was the only way to turn things around for Kenden.

The day of the meeting, Kenden and I met Ms. P at the front office. She showed us around the school, she introduced us to the principal, and we viewed his new classroom. When we walked in the classroom she had a story book about his new school prepared for him to take home. We were greeted by her three assistants and Kenden met the two other students in the room.

She showed us Kenden’s new area and the special chair the would be using in the class. He climbed in the chair and noticed Ms. P had Goldfish crackers in the room. He immediately began to make his request known. Ms. P prompted Kenden to ask for the Goldfish appropriately. Once he followed her direction he was given the Goldfish and she sat and read his story book to him.

Before we left Ms. P and I exchanged contact information and we selected the day he would start school at his new school. After are meeting, I felt okay. I knew that Ms. P would take care of my boy. I admired that she was prepared for Kenden. She clearly did her research and knew as soon as he entered her classroom, the learning had to begin.

Kenden’s first year with Ms. P was pretty rough to say the least. More time was dedicated to behavior rather than academics. I knew that and I was okay with it. His behavior had to be modified in order for him to learn. Ms. P literally pulled her sleeves up and stood firm. There were days he would strip naked, throw and smear his feces, hit, bite, kick, and just wouldn’t listen. Somedays they had the battle of the wills war. Kenden is very stubborn. When his mind is made up there is NOTHING that can be done to change it. Ms. P figured out how to get Kenden to follow through her desired task for him, without breaking his will. She made all the necessary adjustments to accommodate his behaviors. She was consistent, patient, and loving with Kenden. She never once complained about the hard days with Kenden. She pushed through and knew my boy could do it! 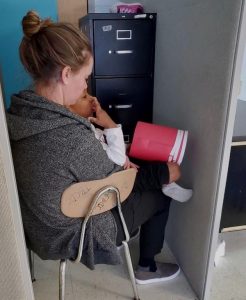 Forming A Bond and Making Changes

Ms. P and I formed our own relationship. We would talk, text, write notes, and send pictures so we could keep a healthy dialogue and connection for Kenden. We were so connected we would give each other heads up if Kenden was having a bad day. We wanted each other to be prepared for the possible tornado that we would be getting. We both encourage a true and honest teacher and parent rapport. We knew we had to stick together and work as one in order to change the behaviors. I definitely needed her expertise and advice and she needed me to trust her with my child. She was always motivating, uplifting, and positive about Kenden. She knew he was smart and could make the behavioral changes.

Ms. P and Kenden made it through the first year school. Before going into the next school year, we had his annual Individual Education Plan (IEP) meeting. Ms. P felt we should scale it back a bit. The goals sit the previous year were based on his ability during Kindergarten. There was regression in his behavior so his willingness to complete task and assigned work completely changed. The IEP needed to be altered to meet his current needs. Her modification geared and setup a positive and progressive school year and we were amazed by his improvements. His behaviors were manageable and he was learning and working in class. I will NEVER forget the amazing video she sent of Kenden walking down the school hallway without her holding her hand. When she asked him to stop he followed the direction given to him. 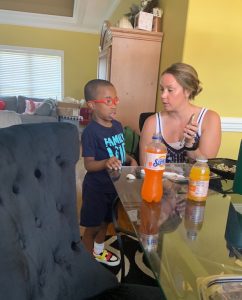 Kenden is a flight risk. He will run away from you and open doors. Little dude bares lots of watching. For me that video brought lots of joy and a sign that we were headed in the right direction. Kenden made countless strides and accomplishments last school year. Ms. P and I felt it was time to increase his goals and push him to the next level for the upcoming school year.

Unfortunately the pandemic hit which lead to quarantine. However, it did not stop Ms. P from having weekly Zoom meetings with Kenden. She read his favorite book “The Cat in the Hat” and they talked about his daily lunch schedule from school. It was obvious they missed each other.

Soon after the closing of school, we found out Ms. P would not be returning for the 2020-2021 school year. Ms. P and I were both devastated. We did our best to tell Kenden but he did not understand. Although I did not want her to leave Kenden, she deserved every new opportunity and advancement given to her. I truly believe she was the only person who could get Kenden in the place he is now.

Ms. P’s consistent dedication and love towards Kenden is the reason why he is doing so well in school today. She is one of a kind. She loves her students to the core of her heart. Just like a parent, she worries and tarries for them. She wants the best for each of her students and wants to offer support to parents. 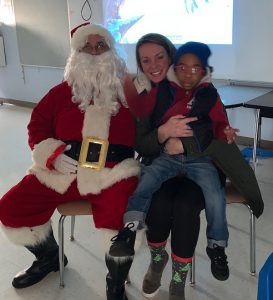 She is thoughtful and selfless. She loves my son so much she FaceTimed him while on her anniversary vacation just to show him the beach. She remembered they did a lesson study on animals in the water and wanted Kenden to see it. There are no words to describe her awesomeness. She’s not just a teacher she is our family. Our paths connected during a very difficult time but now we can say she is our lifetime friend. We love you Ms. P and are so thankful for your devotion and love for Mr. K.

My name is Shalita Thomison and I currently reside in Hendersonville, TN. I am the mother of two amazing boys, Jaylan (12) and Kenden (8). I attended Austin Peay State University where I received my Bachelor’s in Business Administration and my Master’s in Health Service Administration. I work full-time for a non-profit organization located in Nashville. I decided to start a blog about my youngest son Kenden. At the age of 2 he was diagnosed with Autism and later with ADHD. Raising him is truly an indescribable experience. My blog, Exploring the Life of Kenden Carter  is meant to offer other parents hope and encouragement. I am so thankful for Autism because it gave me the opportunity to meet my son.
You can follow Shalita on Instagram at @sthomison