“Autism does not define Aiden, nor our family. Autism guides us.”

I felt so appalled the first time someone suggested that Aiden “maybe” had Autism. He was only 2-years-old at that time and he was going for speech therapy because of language delay.

I remember being so angry. How could she say such a thing! My husband was equally angry. How dare she! It couldn’t be true! After all, his paediatrician said that boys naturally developed slower than girls.

Not being verbal at age two was not really a cause for much concern. We just needed to go to speech therapy to help him get there sooner. “He’ll come around”, she said.

Our emotions got the better of us. We quit speech therapy and decided we are not going to let others define our child. No way!

Three years later, we sat at a preschool evaluation. We answered question after question with tears in-between. The past couple of years had been very difficult raising Aiden. We just couldn’t figure him out. It was like we skipped terrible two stage but we hit it BIG with horrible three’s and it just went downhill from there.

The evaluators were kind and empathetic. They gave me time to cry my heart out. They were patient when hubby had to step outside to gather himself a few times.

We finally had to face the music. His paediatrician called it a “Developmental Delay.” But the honest-to-goodness truth is – our Aiden has Autism.

We tried clinical speech therapy and did not see progress. He had speech, occupational therapy, and ABA therapy incorporated in his IEP at school. We even had a speech therapist from the school district come to our house. We loved it! It was going great. But when we had to move the following year, we found ourselves zoned into a new school district.

The services at the new school district was okay but not quite as good (_and warm_) as the first one. Within a few months, we had to move to Texas because of my new job. After a series of unfortunate events, we learned _and _had to accept, it is different in Texas.

We pulled Aiden from school and decided to homeschool. We saw a paediatrician but we felt she was too distant and unengaged. Aiden’s behavior was getting worse. He was stimming, flapping, snapping, punching, kicking, screaming, crying, etc.! I thought horrible three was bad. A stronger seven year old with aggression was worse!

We kept researching. I probably watched hours and hours of YouTube videos and read so many articles just so I could help us figure out how to deal with Aiden’s behavior issues. We put each new-found “trick” to test. We attended homeschool conventions and researched homeschool curriculums for special needs.

As hubby became more comfortable being Aiden’s homeschool teacher and as we both learned to manage our own behavior and triggers, we started seeing improvement. We went from miserable to manageable.

I started seeing Aiden become more and more affectionate towards his dad. His meltdowns have gone down significantly. His verbal communication has definitely improved. His self-sufficiency has progressed. Our mad house has turned into a fun and loving home. It’s still messy, there’s still chaos, we still have meltdowns,
and we still have to watch out for triggers. But, we now have way more good days than bad.

We have come to realize that everything we have gone through aren’t unique to Aiden and his Autism. We have learned that each of us in our home have our own mess, our own chaos, our own meltdowns, and our own triggers.

Our truth – AUTISM DOES NOT DEFINE AIDEN NOR OUR FAMILY. AUTISM GUIDES US. And so far, it has led us here and I can honestly say, here isn’t bad at all!

You can see more of us at www.aboutusperez.com 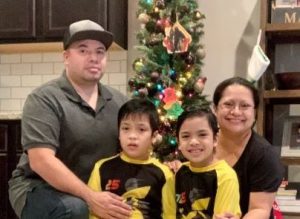 We are a family of four discovering, navigating and loving the life we have been blessed with.
For more, please visit www.aboutusperez.com