April 2nd is World Autism Awareness Day.  Every year on this date, the global autism community celebrates the day with unique fundraising and awareness-raising events.  It has me thinking about what I will do to honour the day.  Will I wear something blue? Will I donate to an autism charity?  Will I “Light It Up Blue”? (I can say I probably won’t do this one!).  I’m not one to advertise that my son is on the autism spectrum, but I will do my part.

In case you’re not sure what all of this is about, here’s a quick overview:

The day is a real opportunity to build awareness, and for families that are living with autism, awareness is particularly important. When your child is having a meltdown in a restaurant or supermarket, there’s something really important about having people understand what’s going on, rather than roll their eyes and assume that your child is ‘badly behaved’.

Whether it is landmarks of the world like the Empire State Building, Niagara Falls or the CN Tower turning blue, it is one day in an entire month devoted to Autism Awareness.  So after April 2nd, when you replace the blue bulbs and go back to wearing your usual colours, don’t forget to move from awareness to acceptance and action.

Awareness about people with autism and their abilities and desires to lead rich, active, connected lives is on the rise.  But more work needs to be done.

What will you do this April 2nd? 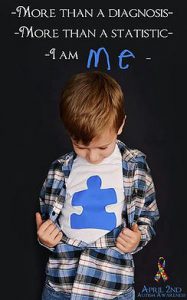