My Name is Jack and I Have Autism

My Name is Jack and I Have Autism

My son, Jack, is 11 years old and and he was diagnosed with autism spectrum disorder at age four.  I guess you could say he’s on the ‘higher’ end of the spectrum. Having said that,  Jack has his own set of challenges.

His anxiety is quite severe, it could take hours just to convince him to put on his shoes to leave the house.  Loud noises are extremley bothersome to Jack and forget about going to busy places (malls, airports, etc).  The sensory overload is just too much for him to handle.

When Jack was 10 years old, we decided it was time he know about his autism.  We felt that he would be able to understand and perhaps knowing he had ‘differences’ could help him, someway, somehow.  I worried that this new piece of information could amplify his anxiety, but it was a risk I was willing to take.

We sat him down and explained it to him in the simplest terms. In addition, I purchased a few books I thought could help him understand his autism.  “All My Stripes” and “I See Things Differently” These books were of great help to Jack.

Its been over a year since we had our talk with Jack and for the most part, I think it has had a positive effect.  If he has an aversion to a food or a loud noise, rather than have a meltdown he’ll say “mom, it’s my autism.”   The first time I heard these words come out of Jack’s mouth I was completely blown away.

Jack recently told me that he wants to explain his autism to people so they know why he gets angry or reacts to things the way he does.  With his permission, he has allowed me to share his letter. 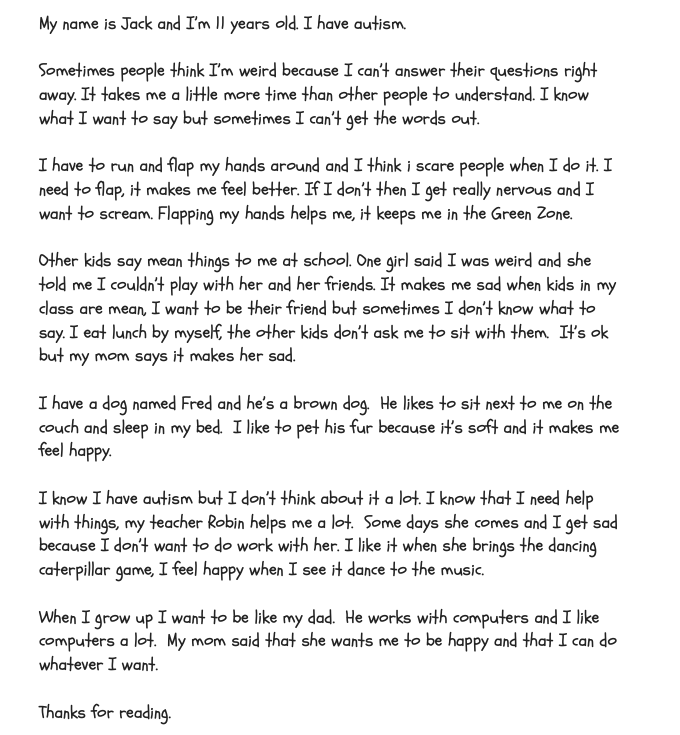 I hope some of Jack’s words shed light on what children with autism (some, not all) deal with on a daily basis.  The internal thoughts, the social isolation and the hope to one day be included.

Some of what Jack describes breaks my heart.  As his mom, it truly pains me to know that he’s bullied and intentionally excluded.  He’s a great kid and I hope that one day, someone will see the greatness I see in him.

As an autism mom, I understand the difficulties that come with raising a child with ASD.  Some days are easier than others, but in the end, we all do our very best.

Candice and Jack live in Columbus, Ohio.  Candice is a physician and an avid autism advocate. Her son, Jack, is 11 and loves model trains, his dog, Fred, and going to the beach.