The Diagnosis: Our Story

The Diagnosis: Our Story

Everyone has a story to tell, this is ours…

Our story is likely similar to yours.  Here’s the abbreviated version: I met a great guy, we dated, got married and had a baby.  My pregnancy was totally normal.  I even delivered my son, Max, one day before my due date.  We had so many hopes and dreams for our boy.  We were thrilled.

Max was a sweet little baby.  During his first year of life, he met every milestone on target, sometimes even ahead of other babies his age.  I felt tremendous pride when my friends would comment that Max was reaching milestones their children hadn’t hit yet. My response would always be “they’ll get there, every baby is different.”  Little did I know…

As Max entered the toddler stage the red flags slowly started to emerge.  He wasn’t talking like other children his age.  But I was told that boys are often delayed in that area, so I didn’t worry too much.  I had his hearing tested just to be sure and the results came back normal. So we had him see a speech therapist to get the wheels in motion.

Max would take anything that was round and spin it.  He would spin the hell out of it.  At first I thought, that’s so funny, he loves to spin things – it didn’t faze me one bit.  He would constantly run back and forth across a room, but my reasoning was he’s an energetic young boy – this still didn’t bother me.  He would flap his hands when he was excited, but I thought nothing of it.  I had seen many children his age flap in excitement.  None of his behaviours seemed troubling, not until I went to a cousin’s birthday party.  A little girl who was roughly the same age as Max was pointing and gesturing to a big pink balloon and suddenly sirens were going off in my head.  That’s when I knew something was “off” with my son.  Max never points.  Max never tries to gain my attention. I was worried.

That night I put Max to bed and rushed to my computer.  I googled ‘hand flapping’ and BOOM, there it was, AUTISM.  So I googled ‘autism symptoms’ and sure enough, he had many of the characteristics of autism, but I was in denial.  I made up excuses like he always turns his head when I call his name or he always makes eye contact – but deep down, I knew.

My husband was away on a business trip but I couldn’t wait, I had to share my suspicions about our son.  I called him in a panic. The tears started to flow, hard.  I was finally able to blurt out “I think Max has autism.”  Of all things, this wasn’t what he wasn’t expecting to hear and all he could say was “no, he doesn’t. Don’t worry.”  I couldn’t accept that, my mommy instincts were too strong. 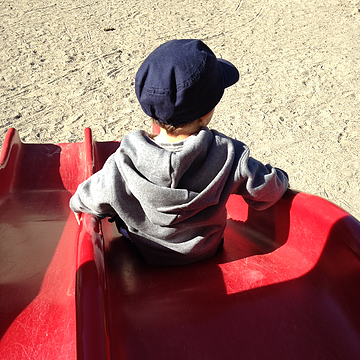 Months later, after waiting for what seemed like an eternity, we had an appointment with a developmental paediatrician.  We would finally know if I was right, or wrong, about my boy.  I felt nervous and afraid, I just wanted to get in there.  A part of me had a tiny shred of hope the doctor would tell me I was wrong.  I was clinging to that hope.  After more than three hours of testing the results were in.  The doctor showed us a graph that may as well have been in another language, as it looked completely foreign to me.  The words “Max is on the autism spectrum” came out of her mouth.  My heart sank into my stomach and I had a lump in my throat.  Tears started streaming down my face.  The doctor was talking but by then I wasn’t listening.  My husband was crying too.  All I could do in that moment was watch my beautiful, sweet son, play with the door stopper that was behind me, completely oblivious to the bombshell we just received.

As we left the doctor’s office, everything felt different.  A few hours prior he was just a regular kid.  Now he was labeled as autistic and a ‘special needs’ child.  No matter what the label, I had to get help for my son.  I didn’t know where to begin, but I was very anxious and I didn’t want to waste any time.

Max had been seeing a speech therapist before his diagnosis and I shared the news with her.  She gave me a list of ABA providers to contact.  I had no idea what ABA (Applied Behavioural Analysis) was and I certainly wouldn’t have known to look for this kind of service.  I did my research and contacted quite a few ABA providers.  What an exhausting process!  We finally selected a provider we felt would be a suitable fit for Max.

We’ve seen many gains since Max’s diagnosis, but it’s a process.  I’ve learned that there are no miracle therapies out there.  Your child will progress at his or her own pace. I often read about these miraculous ‘breakthroughs’ or children who have ‘lost’ their autism diagnosis and I get angry. Angry because it gives false hope.

I have learned many things about my son over the years.  I have a better understanding about the certain behaviours he displays, sensory issues he has and how he learns and absorbs information.

In the early days I constantly worried about what he couldn’t do and what he wasn’t doing.  Now I focus on all of the things he is capable of doing.  We have tremendous hope for our son.

Every day brings a new challenge that I’m ready to take on.  As long as my son knows he is loved, safe and taken care of, I’m a happy mamma.