The Kindness of Strangers

The Kindness of Strangers

My son Connor is autistic, and the loves to watch flowing water. Which means that in the warmer months, he likes to have the hose going in the backyard for hours at a time. While I have no issue with his love of water, it does elevate our water bill. Not to mention creating all the mud in our small yard.

One night, I brainstormed a setup so that Connor could have flowing water, but we wouldn’t need the hose to be constantly running. I pictured two small reservoirs – buckets, maybe – connected by a gutter. Then a recirculating pump could take the water from the lower reservoir and feed it back into the top one, so he wouldn’t have a continuous stream of water flowing down the gutter.

I decided a trip to the hardware store was in order. I just wanted to look at the stuff in the gutter section and get some ideas as to how I’d make this work. I didn’t quite have it all pulled together. Plus I wanted to price pumps, as I knew that would be the biggest part of the investment.

While standing in front of the gutters, thinking, I decided to take a couple down and contemplate the project ahead. An employee approached me and asked if I needed help. “Not really,” I said. “I’m just trying to figure something out. It’s a toy for my son, actually.” I briefly explained, then I said “Really, I’m fine. I’m just brainstorming.”

A couple of minutes later, the man returned with his colleague named Glen. “I’m going to help you anyway,” the first man said, smiling. So I explained to Glen about Connor and his fascination with flowing water. And the adverse affect on our water bill.

Glen and I started talking. He walked me back up the aisle to find another piece of the puzzle. An employee approached him with an issue, and I told him was fine to go look at pumps if he could just point the way. I wasn’t planning on buying the setup that day, so I didn’t want to take up too much of his time.

He said he was going to walk me over, and he did. Along the way we ran across Jesse and Jeff, two more employees. Glen said they were the guys to help me out with the recirculating pump question. He described the project to them, and they came with us to the shelf holding all the pumps.

To my amazement, they then stayed there with me and helped me figure out the entire setup. Jeff went and got more pieces, and we laid out a mock relay of buckets, hoses , connectors, and a recirculating pump.

I started to worry whether I’d remember all the connections to tell my husband Roger about later on. So I said that maybe I’d buy the connections, hoses, etc, but leave the pump, which wasn’t quite in the budget, for later.

We talked a moment about prices for a couple of the items, and then suddenly they said they’d see about getting me out of there with everything.

I was dumbfounded. Jesse and Jeff took the pieces we’d been using and headed up front to talk to the manager. Glen went with me to get one final piece. Along the way, he explained that it was their mission was to become the number one service provider anywhere.

“Well, you succeeded.” I said  .

The manager agreed, they made a list of everything, and Glen put it all in my car. They told me to come back if we needed any help with the project. I don’t know how many times I said “Thank you,” I hope I said it enough.

I am someone who works with words for a living, and I couldn’t express to them how amazing the whole experience was. I went in there intent on just looking, and wrestling with the details on my own. I left with a completed design, all of the parts I needed (worth over one hundred dollars) for no charge, and a sense of amazement at how genuinely interested, and how willing to help, these guys were.

I am still dumbfounded.

Connor was so over the moon with this new backyard setup. We saved a ton of money on our water bill. And I found out that there are people out there who are willing to help, often when you least expect it. One thing that I know is that this means a lot more to me than they realize. 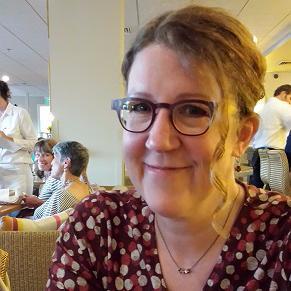 Stephanie Carmel is based in Portland, Oregon. She is an editor, writer and trepid traveller. On the lookout for books to edit, mysteries to solve and the perfect cup of tea to indulge in.